Skip to navigation | Skip to main content | Skip to footer

Recent work by MACE's Dynamics Laboratory - in conjunction with Dyson - is pushing the boundaries of what's possible in high-speed appliances.

Rotating machinery for high-speed engines has historically relied upon oil-lubricated supports to reduce the wear caused by friction and vibration. Oil-free turbomachinery is an emerging technology that allows operation at high speeds using "foil-air-bearings" (FABs) - a system that allowing the rotary shaft to spin with greatly reduced friction on a cushion of pressurised air.

The ultimate aim of this technology - as proposed by NASA - is to assist in the design of an oil-free turbine engine capable of powering 21st-century aircraft. 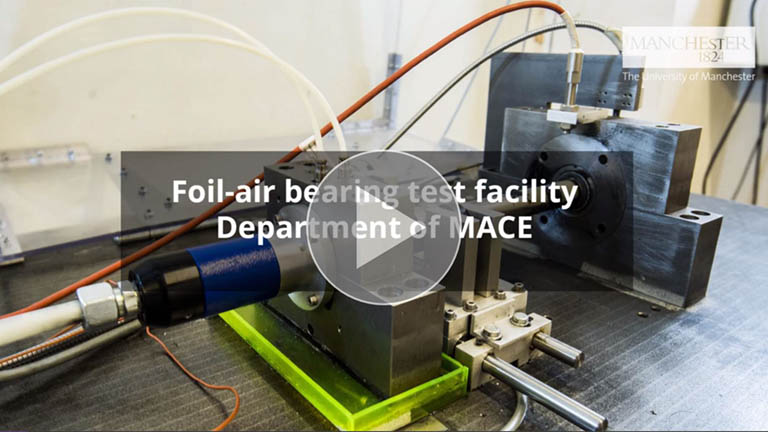 Research has centred on "nonlinear" problems - that is to say FABs, like conventional oil-bearings, are nonlinear elements that require careful design to mitigate undesirable vibration effects like self-excited instabilities (which may induce fatigue problems in the rotary system).

Part of the challenge rests on the complexity of the bearing model and computational costs of modelling the rotordynamics as part of the design process, so as to guarantee structural integrity and provide a knowledge database for in-service monitoring.

Led by Philip Bonello, Reader in Engineering Dynamics in the Department of Mechanical Aerospace and Civil Engineering, the research team was the first to devise a suite of algorithms for the simultaneous solution of the differential equations governing the coupled rotor, air film and foil structure domains.

The basic methodology of the research has been adopted by other leading centres, for example, Siemens-funded research.

With Dyson, we are investigating the feasibility of using FABs in high-speed machines using FAB simulation tools developed at The University of Manchester.

Foil-air bearings (FABs) flourish at speeds in excess of 100,000 rpm since their load capacity increases with speed and because they have lower rotational friction and higher vibration damping than rolling-element bearings. Hence an opportunity exists for faster, quieter, cleaner and greener (lower power consumption) appliances.

If you would like to find out more about the work Dr Bonello and his team are doing, or are interested in business or research collaborations, please email:

Explore our research in more detail

You can find out more about our research on our dedicated website.

Learn more about the work our Department carries out in collaboration with businesses.

Get in touch with any industry-related research enquiries.